It took a while to get this recipe right, hence the different pics of pie and its variations, like the rhubarb pie with a crumble topping.

For every 1 cup rhubarb, you will need 1/3 cup cane sugar and 1 1/2 Tablespoons flour or 3/4 teaspoon of cornflour/cornstarch. 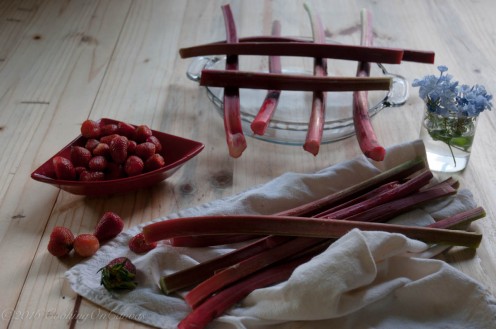 Roll out the crust (Homemade Flaky Pie Crust), line the pie dish and chill in the fridge.
In the meantime, wash and dice the rhubarb and strawberries (optional). Measure out the number of cups of rhubarb.

I used to bake the rhubarb without precooking, but it would be more on the soupy side (which I didn’t mind, but is really messy.)

So a sure-fire way is to barely cook the fruit with half the sugar, cornstarch and a pinch of salt on the stove for about than 5 minutes on medium-low heat. Cool.

Scoop the warm fruit (save the syrup for pancakes) and spoon it on the chilled crust. Sprinkle the remaining sugar, cinnamon, lemon juice, bits of butter. Cover the pie with the remaining crust or a crumble topping.

Bake for 20 minutes at 200ºC and then lower to 180ºC for 40 minutes, covered with aluminum foil to prevent the crust from browning too much. 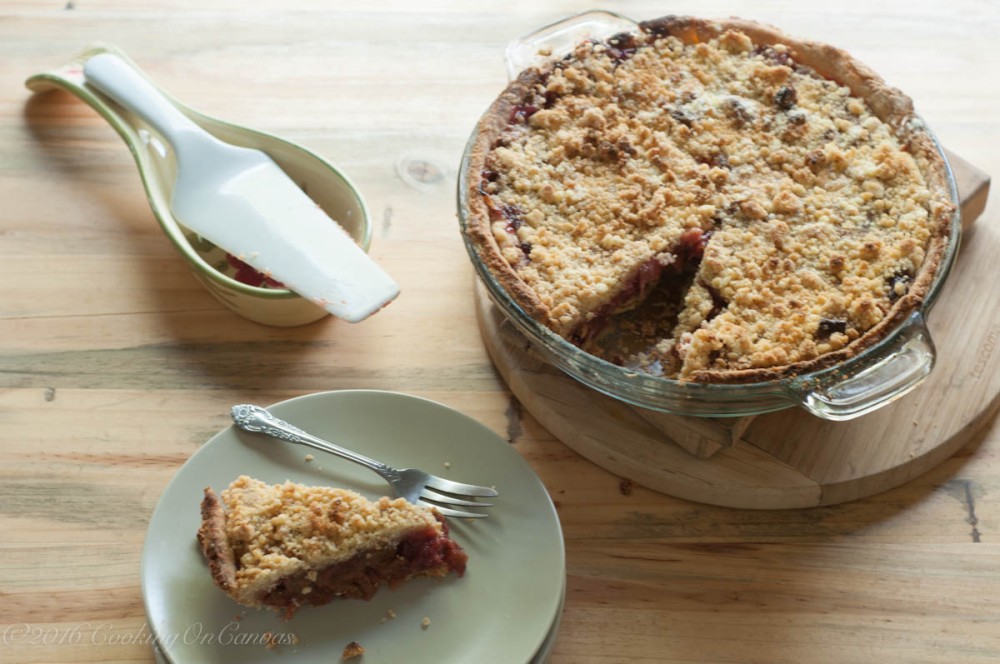 Serve with vanilla ice cream or vanilla yoghurt and enjoy!

One day when I was out of sugar (and time), I substituted with 2 cups of icing (confectioner’s/powdered) sugar. It was sufficient for the 6 cups of rhubarb and did not need to add cornflour or any flour. Later I simply added butter, cinnamon and lemon juice.

Another random thought: 1 cup of rhubarb has the same amount of calcium as 1 cup of milk.

Roll out the pie crust and line the pie dish. Chill in the fridge.

Wash and dice the rhubarb and strawberries (optional). Note the number of cups of diced rhubarb. (For an easy recipe read, let’s say you got 6 cups.)

Cook the 6 cups rhubarb, 2 cups sugar, 4 1/2 Tablespoons cornstarch and a pinch of salt in a large pot. Cook for about than 5 minutes on low heat. Basically some of the water will have released and some of the rhubarb will be mushy, but most will still be whole.

Layer the fruit on the chilled crust. Sprinkle 2 teaspoons cinnamon, 2 Tablespoons lemon juice, and butter. Cover the pie with the remaining crust or a crumble topping.

¹ Possible to substitute with 2 cups of icing/confectioners sugar, but do not include the cornstarch in that case.